BVB delegation at the World Holocaust Forum in Jerusalem 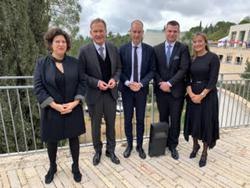 On January 27, 1945, the Red Army liberated the Auschwitz camp complex. Four days before the 75th anniversary of the liberation, heads of state and government from around the world meet today in Yad Vashem for the fifth World Holocaust Forum. A invited delegation from Borussia Dortmund is also among the invited guests. The message is clear: there must be no place for anti-Semitism - neither in Germany nor anywhere else in the world!

BVB committed itself to fighting anti-Semitism and discrimination of all kinds twelve years ago. True to the motto “Borussia connects! Remember together. Together Against Anti-Semitism ”, the club engages with its fans, employees, partners and sponsors through educational trips, workshops and other formats. As a consequence of its longstanding activities in this field, which are scientifically supported, BVB supported an extension of Yad Vashem (www.yadvashem.org), the Holocaust Memorial in Jerusalem, with a donation of one million euros last April.

(from left) Ruth Ur, representative of the Holocaust Memorial Yad Vashem in Germany, welcomed the BVB delegation around Hans-Joachim Watzke (CEO), Carsten Cramer (Managing Director), Daniel Lörcher (Head of Corporate Responsibility) and Sarah Reichert (assistant to the management) at the World Holocaust Forum in Jerusalem.

The Holocaust aimed at the total annihilation of the Jews, the extermination of their culture and history, it was driven by anti-Semitism. Yad Vashem works tirelessly to raise awareness and awareness of this dark chapter in history. In addition to the memory, the latest anti-Semitic incidents such as the Halle an der Saale attack in October of last year will also be the subject of the World Holocaust Forum, which will be held under the motto “Remembering the Holocaust. Fighting Antisemitism ”takes place.

“It is a great honor and recognition for us that Borussia Dortmund can participate in the World Holocaust Forum. Our donation last year was a sign that we are consistently fulfilling our social responsibility. At the same time, it is also a sign that we still have to learn from the past and that anti-Semitism must be clearly identified and fought today, ”says Borussia Dortmund's CEO, Hans-Joachim Watzke.

During the World Holocaust Forum, BVB decided not only to continue its preventive educational work, but to gradually supplement and expand it. Among other things, Borussia Dortmund will shortly sign the working definition of the International Holocaust Remembrance Alliance (IHRA) for this purpose.

“Football in general and Borussia Dortmund in particular have the power to address and raise awareness of people regardless of their education, age or financial opportunities. Against this background, and against the background of our preventive educational offers, the adoption of the IHRA working definition is an important step. It should serve in particular as a role model, for example, for corresponding educational content in adult, child and youth education. In this way, it can help to work out and analyze the diverse facets of anti-Semitism, ”emphasizes BVB Managing Director Carsten Cramer.

Borussia Dortmund is represented at the World Holocaust Forum by Hans-Joachim Watzke and Carsten Cramer, among others. When the liberation of the camp complex is commemorated on Monday next week in Auschwitz, Watzke is also one of the invited guests at the Auschwitz-Birkenau state memorial.

The working definition of the International Holocaust Remembrance Alliance ( www.holocaustremembrance.com ) in the wording:

“ Anti-Semitism is a certain perception of Jews that can express itself as hatred of Jews. Anti-Semitism is aimed, in word or deed, at Jewish or non-Jewish individuals and / or their property, as well as against Jewish community institutions or religious institutions. The state of Israel, which is understood as a Jewish collective, can also be the target of such attacks.